Here’s a lazy, peaceful little bit of wooded stream at night.  Look at all those fireflies…or are they.  Write a little Flashy Fiction set it this scene.  Maybe it is the tranquil, firefly-filled escape it appears at first glance…or maybe those aren’t really fireflies.  Maybe they are little fairies or some sort of malignant insect and guess who just showed up to be a late night snack.  Whichever way your mind wanders first, go that way, and be creative.

Do you suffer from, or maybe enjoy, self-deception? According to Dean Koontz’s narrator in “Ashley Bell,” people do it all the time. For today’s prompt, read the excerpt above, then write a little Flashy Fiction in which someone suffers from a case of self-deception. It could be a serious or mild case. Maybe it’s not your protagonist suffering from this case, but they’re somehow involved with it. However your story comes together, just let it go. #BeFlashy 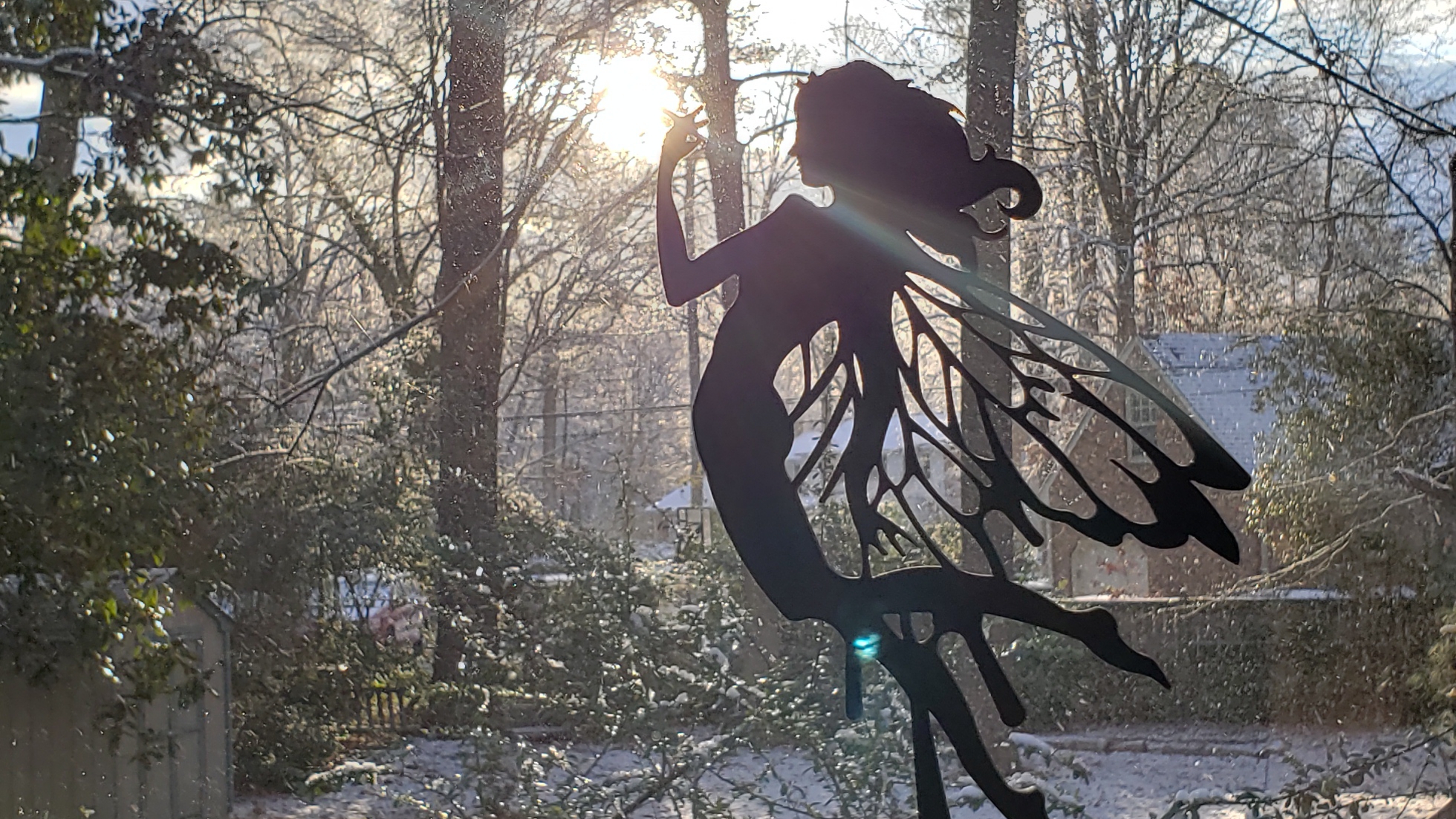 We had our first (and possibly only) snow of the year last night.  There was just enough accumulation to cover most surfaces with a layer of snow…and in the morning light, it makes for a pretty sight that our window fairy presides over.  For today’s prompt, write a little Flashy Fiction about a first snowfall or a fairy watching over a garden or yard or a mix of both.

For today’s prompt, which falls on Valentine’s Day this year, write a little Flashy Fiction that starts with a well-known line from another story, poem, movie, etc. For example, start your story with “A rose by any other name…” or “How do I love thee…” or any of the many well-known ‘love’ pieces. While Valentine’s Day is typically aligned with love, don’t be afraid to take this a darker direction with jilted lovers, eternal love that stretches beyond life as ee know it, or any other direction. Have fun and have a Happy Valentine’s Day…whatever that means to you, but fit a bit of creativity in your day.

As Autumn is now upon us, it’s fitting that today’s video prompt is “Seasons Change” by Exposé.  This hit used the changing of the seasons as a metaphor for the changing of feelings in relationships.  Listen to the song and write a little Flashy Fiction that involves the changing of a season…literally or metaphorically.

Today’s video prompt is “Higher Love” as sung by Steve Winwood and his daughter, Lilly.  There are a few very slight changes in the lyrics, but it’s sung at a much slower tempo than the original hit by Steve.  Take a listen, read the lyrics, mull it over, and write a little Flashy Fiction that revolves around “Higher Love”.  Your protagonist could be searching for it, experiencing it, falling out of it …or simply listening to it.

Think about it, there must be higher love
Down in the heart and in the stars above
Without it, life is a wasted time
Look inside your heart, I’ll look inside mine

Things look so bad everywhere
In this whole world, what is fair?
We walk blind and we try to see
Falling behind in what could be

Things look so bad everywhere
In this whole world, what is fair?
We walk blind and we try to see
Falling behind in what could be

I will wait for it
I’m not too late for it
Until then, I’ll sing my song
To cheer the night along

dictionary.com defines procrastination as “The act or habit of procrastinating, or putting off or delaying, especially something requiring immediate attention.” Fittingly, I’m post the writing prompt from last Friday on Monday. We generally take procrastination to be a less-than-positive trait, but in this case, let’s see if you can write a little Flashy Fiction in which your protagonist’s procrastination turns out to be a good thing. Don’t jump right on this, maybe get your story written by tomorrow…or Wednesday. <grin>

A paladin
courtesy of pixabay
Wikipedia defines ‘Character Flaw’ as such: “In the creation and criticism of fictional works, a character flaw is a limitation, imperfection, problem, phobia, or deficiency present in a character who may be otherwise very functional. The flaw can be a problem that directly affects the character’s actions and abilities, such as a violent temper.”  Sometimes, even character attributes that might seem good, can be seem flawed when taken to extremes.  For instance, in Dungeons & Dragons, a paladin follows a strict moral code while also serving the will of his deity.  This typically includes never lying…which can cause problems for a group of adventurers.  Write a little Flashy Fiction that shows other characters reacting to your protagonist’s character flaw.

The picture above is of the original Garden of Allah hotel, which opened in 1920’s.  It was a refuge for the Hollywood and artist elite for many years.  The Garden of Allah is also one of my favorite songs by Don Henley.  Like many of his other songs, it’s a perfect social commentary.  So today’s prompt has a few possibilities:  write a little Flashy Fiction inspired by the hotel or the idea behind the hotel, or by the song (lyrics and video link below), or by making a social commentary yourself.  If you go the social commentary route, the story need not have a thing to do with music or hotels.

Video:  The Garden of Allah  [Unfortunately, I was only able to find one link to the original video, so I am providing the Bing search result that will bring it up for playing because I’m not sure I want to link straight to the source.]

It was a pretty big year for fashion
A lousy year for rock and roll
The people gave their blessings to crimes of passion
It was a dark, dark night of the collective soul
Now was somewhere out on riverside
By the El Royale Hotel
When a stranger appeared in a cloud of smoke
I thought I knew him all too well

He said now that I have your attention
I got somethin’ I want to say
You may not want to hear it
I’m gonna tell it to you anyway
You know, I’ve always liked you, boy
Cause you were not afraid of me
But things are gonna get mighty rough
Here in Gomorrah-By-The-Sea

He said it’s just like home
It’s so damned hot, I can’t stand it
My fine seersucker suit is all soakin’ wet

Nice car
I love those Bavarians, so meticulous
You know, I remember a time when things were a lot more
Fun around here
When good was good, and evil was evil
Before things got so, fuzzy
Yeah, I was once a golden boy like you
And I was summoned to the halls of power in the heavenly court
And I dined with the deities who looked upon me with favor
For my talents my creativity
And we sat beneath the palms in the warm afternoons
And drank the wine with Fitzgerald and Huxley

Today I made an appearance downtown
I am an expert witness, because I say I am
And I said, gentleman, and I use that word loosely
I will testify for you
I’m a gun for hire, I’m a saint, I’m a liar
Because there are no facts, there is no truth
Just a data to be manipulated
I can get any result you like
What’s it worth to ya?
Because there is no wrong, there is no right
And I sleep very well at night
No shame, no solution
No remorse, no retribution
Just people selling T-shirts
Just opportunity to participate in the pathetic little circus
And winning, winning, winning

It was a pretty big year for predators
The marketplace was on a roll
And the land of opportunity
Spawned a whole new breed of men without souls
This year, notoriety got all confused with fame
And the devil is downhearted, baby
‘Cause there’s nothing left for him to claim

He said it’s just like home
It’s so low-down, I can’t stand it
I guess my work around here has all been done

Looking for a topic…

The Short & Sweet
Check out the prompt!
Be Creative!
write some flashy fiction
Share It!
in the comments or a link to your site
or
The 411 (The Full Monty)